The Asus EeePC is an awesome little machine. I have the 701 model, which has 4GB of hard drive space (basically a 4GB flash card), and 512MB of RAM.

This model comes with Xandros Linux pre-installed. Xandros is very useable out of the box. By default, the EeePC is in “Beginner mode” but you can switch it to use “Advanced mode” which is a KDE-based Linux desktop.

Linux is just fine for 99% of what you’ll want to do, especially since all the apps (OpenOffice, etc) are preinstalled and preconfigured. There’s no reason for most users to want to change the OS on the EeePC. But we’re going to install Windows on it, just because we can.

This is where Windows Fundamentals for Legacy PCs comes in. This is an OS that Microsoft put out to its corporate customers to install on Windows 98-Class machines. The requirements are super light — it needs 64MB of RAM, and 700MB or so of hard drive space. I had used Windows FLP before, but mainly on really old hardware or inside VMware virtual machines. It’s basically a very light version of XP SP2.

Windows FLP is only available to corporate customers and you’ll need a corporate volume license serial number for it to work.

The very first requirement for installing Windows FLP on the EeePC is an external USB drive of some sort. A thumb drive, USB hard drive, or USB CD or DVD drive. The Windows FLP installation CD is about 600MB, so you can just image the ISO onto a USB drive and boot from it. The easiest way, though, is just to borrow or buy an external USB CD or DVD drive. It’s a good investment, and you can use it later to install more software on the EeePC. 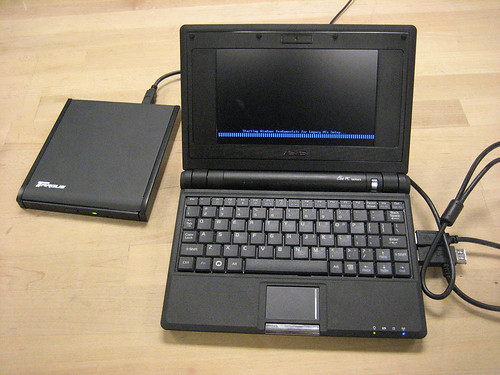 Anyway, whichever method you choose, you’ll have to go into the EeePC BIOS and change the boot order so that it will boot from USB before the internal drive. Just press F2 when the computer boots to enter setup mode. While you’re in here, make sure the **OS Installation **option is set to “finished.” 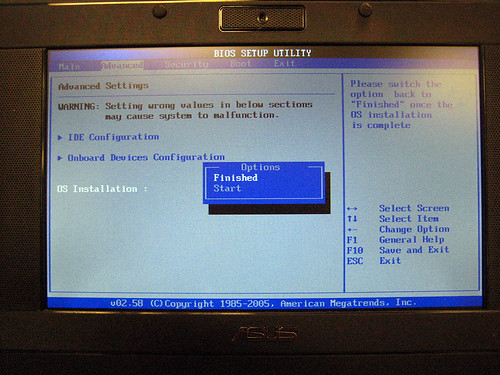 Once you’ve saved your BIOS changes, the EeePC should boot into the WindowsFLP installation routine. Pick the default (guided install), put in your windows serial number, and then y0u’ll eventually arrive at the disk partition screen. 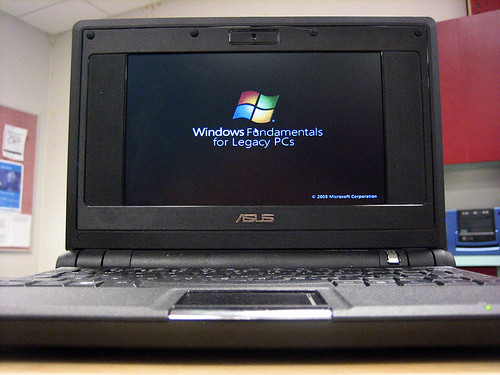 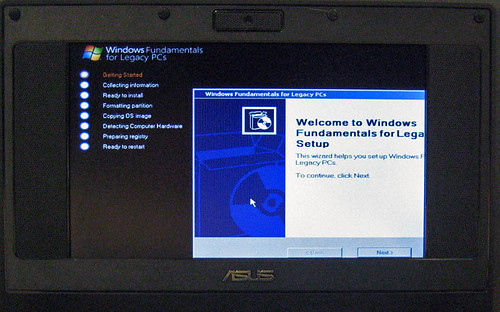 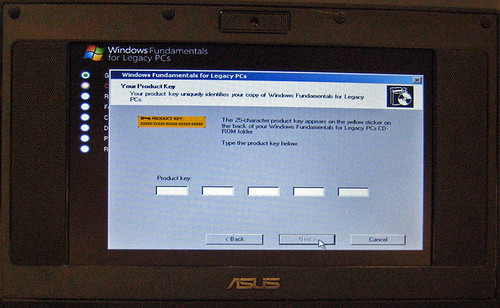 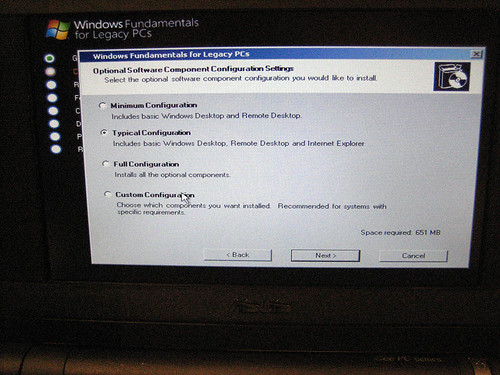 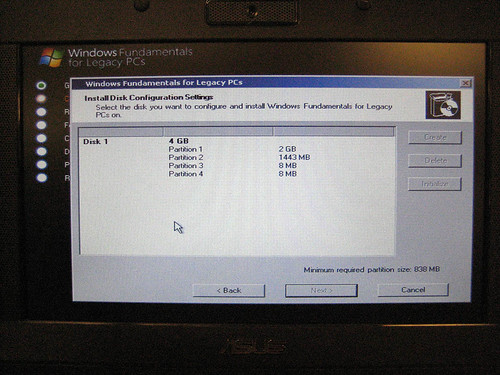 As you can see from the photos, there are multiple partitions on the disk right now. I just wiped them all out and created one 4GB partition. If you have a problem at this point, with an error message about no system disk, then you probably didn’t do the “finished” bit in the BIOS above.

Ok, it should reboot once its done — it may reboot a couple of times, it’s ok. At one point during the plug and play detection, it looked like the installation had frozen, since the progress bar wasn’t moving at all. No worries, go have a coffee, it will be a few more minutes, but it will install. 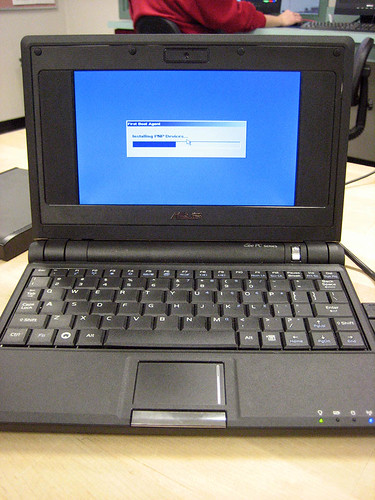 Seriously, be patient. Don’t abort here. It may reboot a couple of times.

Once Windows FLP is fully installed, you’ll be greeted with a “Press CTRL-ALT-DEL to Login” screen. Go ahead and login. Everything’s installed properly, but you’ll now need the DVD that came with your EeePC. It will have all the necessary drivers for the unknown devices (ethernet, wifi, trackpad, etc). If you’re using an external DVD drive, just pop in the disk. If you’re using a USB thumb drive, you can just copy over the contents using another computer.

There’s a setup program on the DVD, which will install all the drivers. You’ll need to reboot 3 or 4 times for it to finish.

Here’s an important step you’ll need to take at this point: when you first reboot, go into the BIOS and switch the boot order. You don’t want the ASUS EeePC DVD to boot when Windows reboots. By the way, you would use this DVD to restore the Xandros distro back on the EeePC if you get sick of Windows. 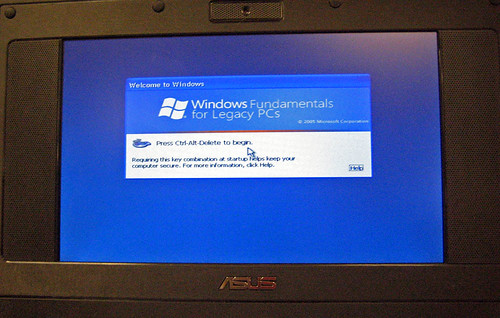 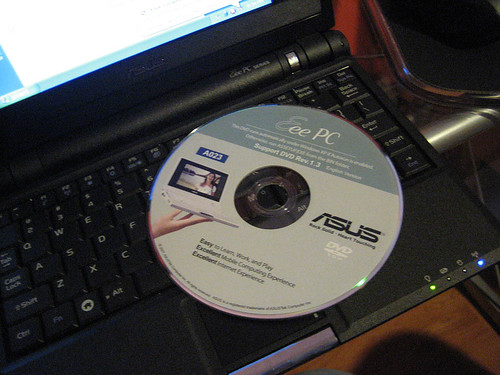 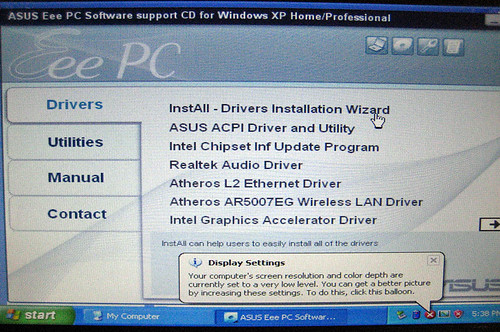 That’s it! You’re all done. Now you’ll have to install some software. My advice: download Firefox right away, as well as a virus scanner (I use clamwin). Then run Windows update. There are a bunch of updates — 50 or 60 of them. So while Internet Explorer is downloading updates, you can use Firefox to download other software (such as OpenOffice).

You’ll probably want to download msconfig so that you can turn off some of the unnecessary tray lint. And tweakui to get rid of that annoying login window. 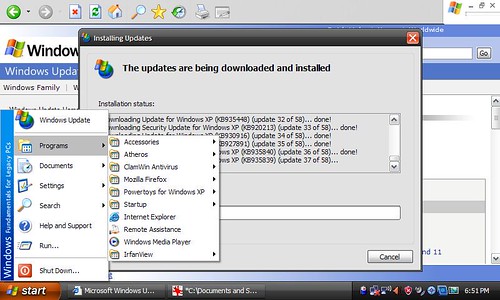 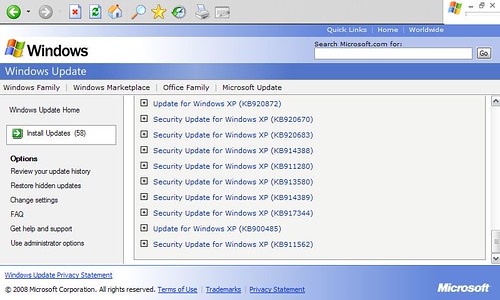 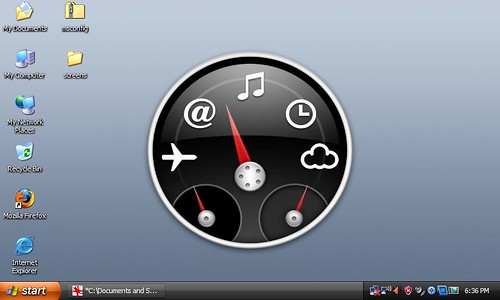 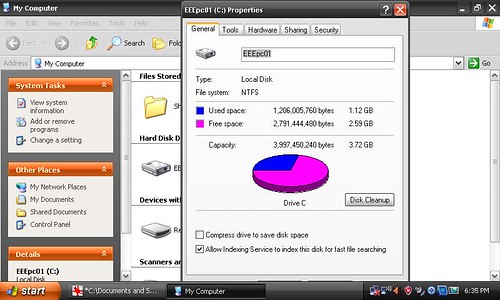 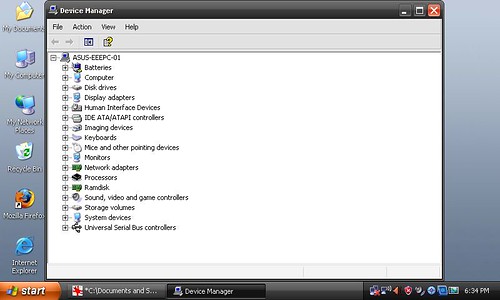 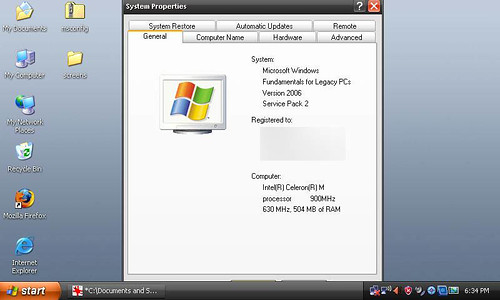 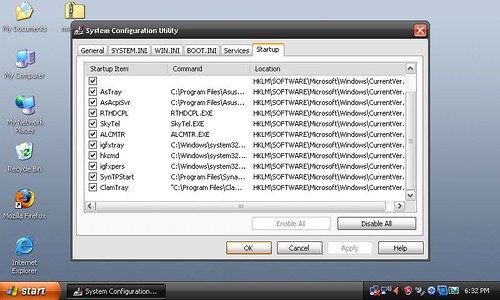 Apparently there are no posts at the moment, check again later.