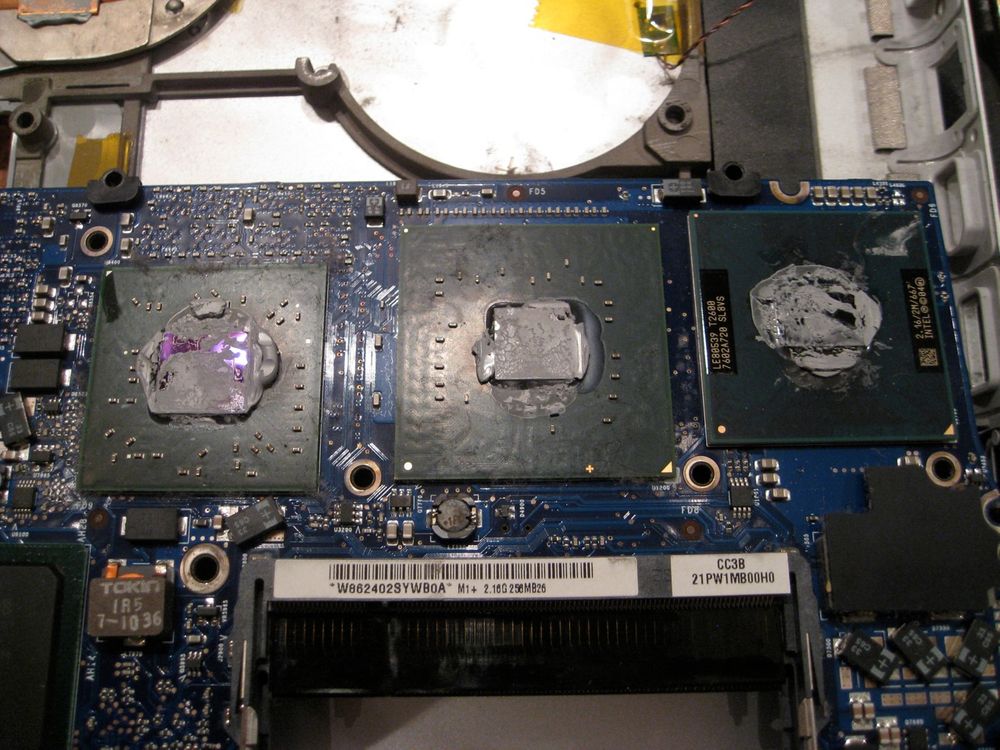 – Corrupt video (from boot until white-screen after boot-screen)… in the pattern of a checkerboard, with 0.5cmx1.0cm tiles of either GOOD SCREEN or DISTORTED PIXELS
– Would not boot past Boot-screen (became white-screen… same thing on TV when connected to the computer)
– Safe-mode worked, but still had the “Checkerboard” Corrupt screen (again, same pattern reflected on the TV when connected) 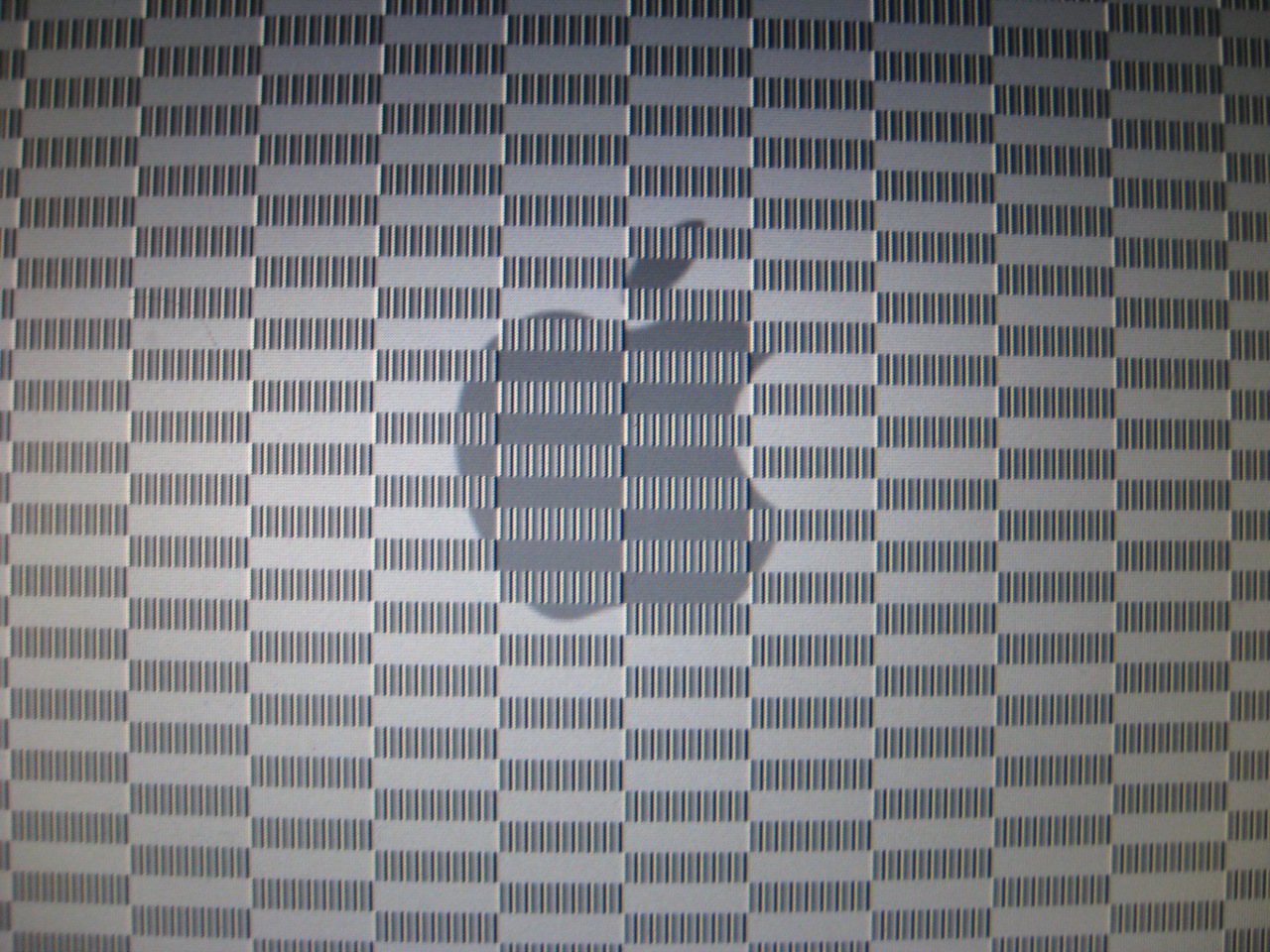 I took it to an Apple Service center here in Budapest and they told me that the Logic Board needed replacement and that it would cost 300,000HUF (aprox. $1,350CAD) and that it is not worth is (agreed!).

After extensive searching (finding it hard to find similar cases out there anywhere) I finally came across this video which I thought was a joke, but then I read up on it and it pushed me towards my new direction.

As I had already decided to replace my 2006 MacBook Pro with a new MacBook Pro, I advanced under the notion that I had nothing to lose and began a more “professional” approach to the above linked video (meaning the use of a heat-gun rather than a tea candle).

After opening up the computer and posting this thread about how to find the ATI chip (which I soon discovered on my own) I began with a 15minute heat-gun treatment focusing on the ATI chip in attempt to reflow the connection to the Logic Board while gradually increasing the temperature on the gun (absolutely no idea about what extent of heat to use or for how long… but I did put some Low-temperature Soldering Wire beside the chip, and when that started to melt I continued heating the chip for another minute or three). 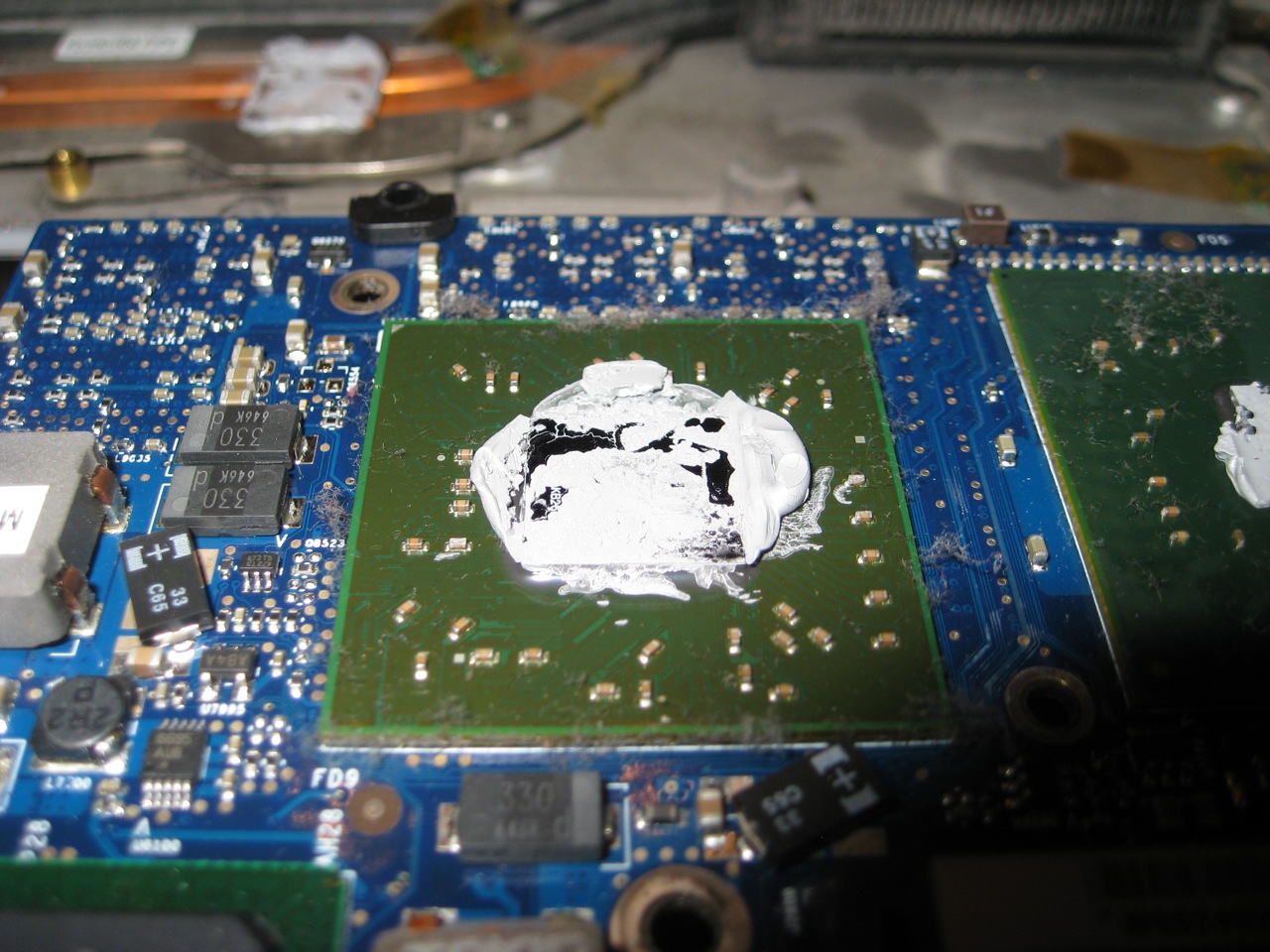 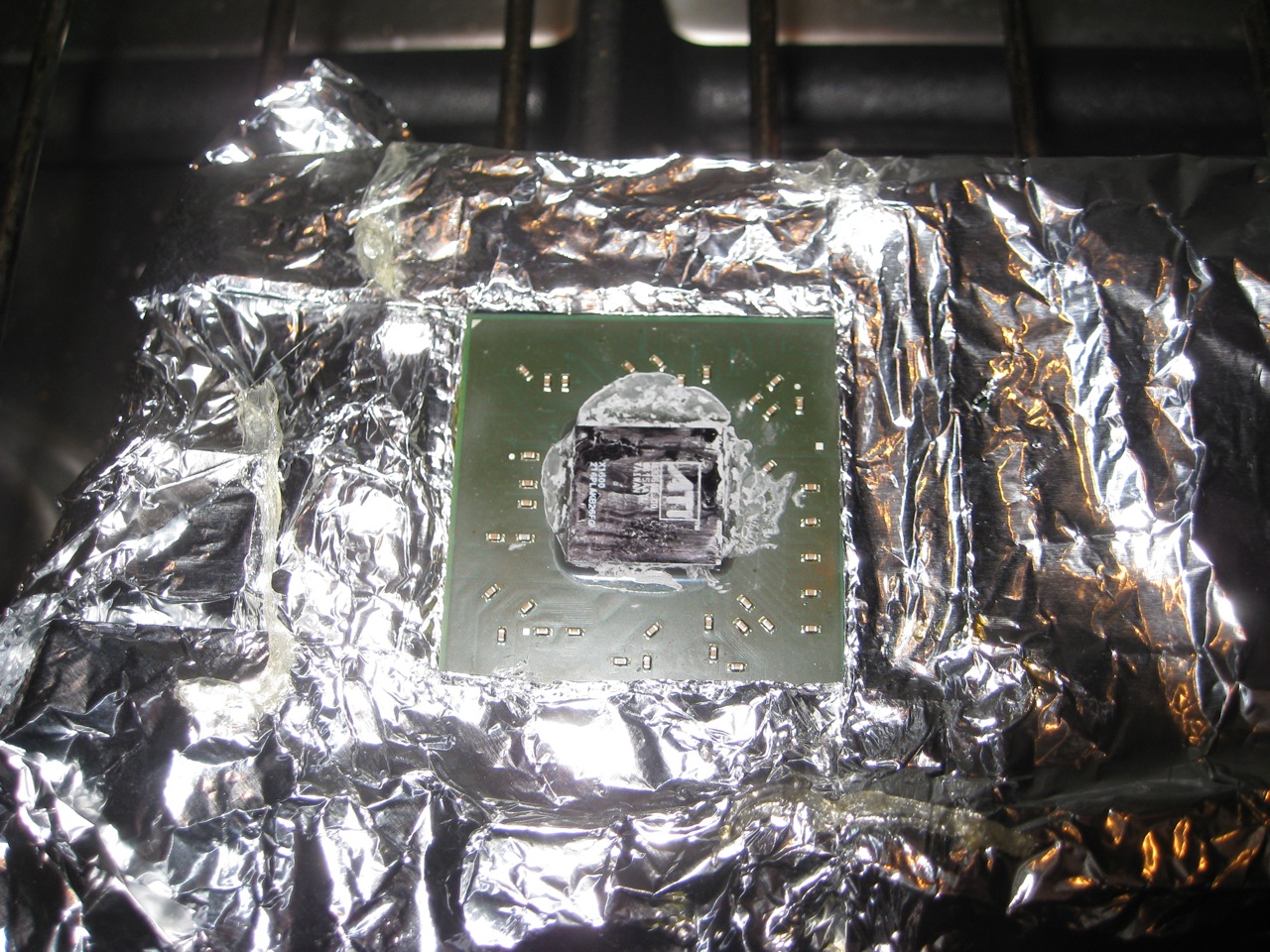 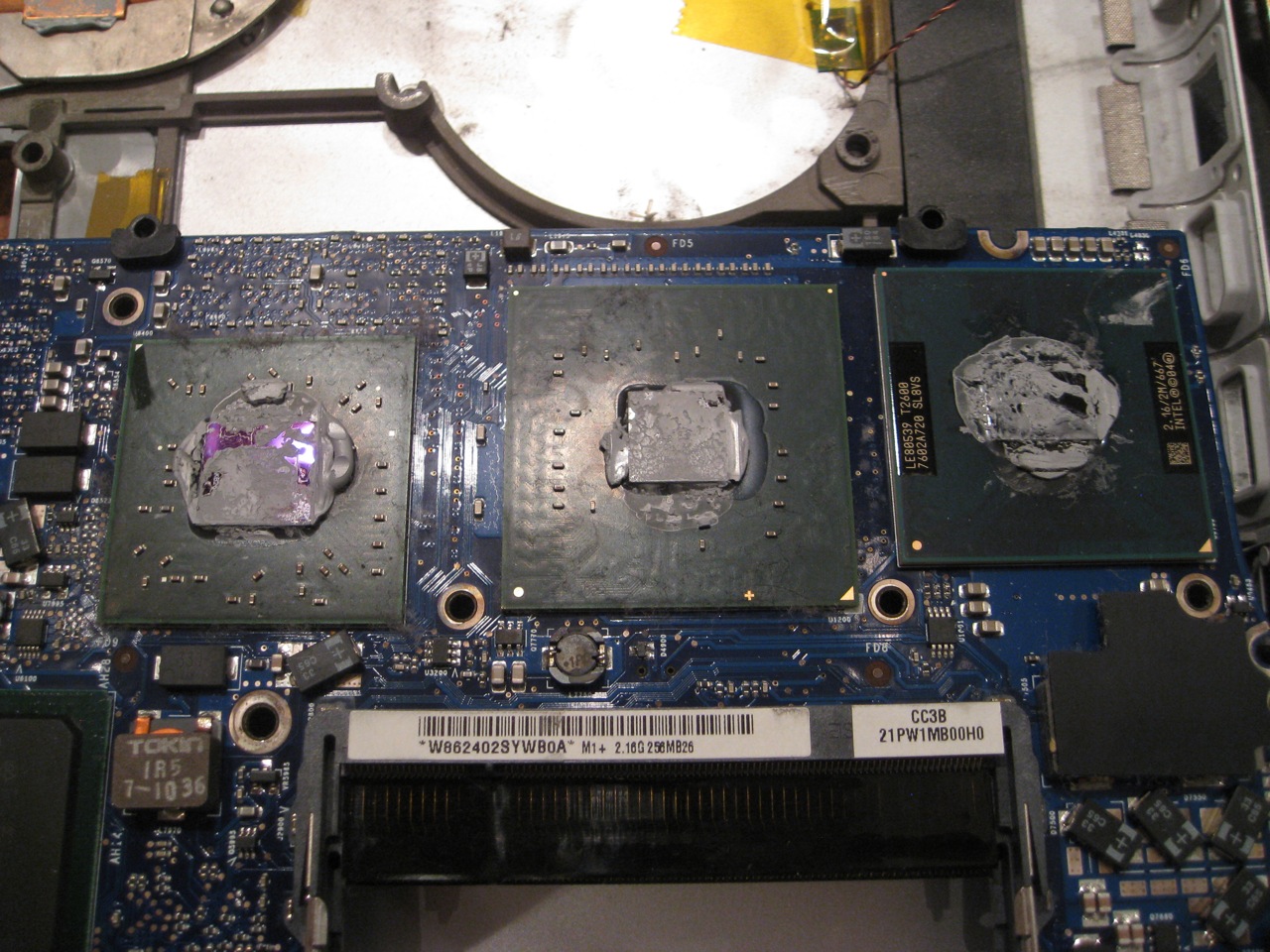 I allowed the board to cool while I went out for dinner, then upon coming home I closed it up and attempted to boot…

Setting aside the idea that I fried the Logic Board, I searched for the boot to black screen and read a thread mentioning almost every different “attempt to fix” involving button pressing… so I pressed a variety of buttons to attempt to fix the problem (CMD-OPTION-P-R…  Hold in Power Button…  SMC Reset… etc).  I then got to the part of the thread mentioning changing up the RAM…  so I did (the current setup was 2x 1GB ram… one from Apple, one after market).

I tried different combinations of the RAM until I used the After-Market chip in the Top slot…  BOOT-UP!!!

The computer asked me about some preferences that I haven’t had to answer since my format last year…  but it worked!

I then tried the RAM again in varying combos until I got both sticks back in (which worked at every combo), so I’m assuming that I just didn’t have the RAM inserted properly after I closed things up. 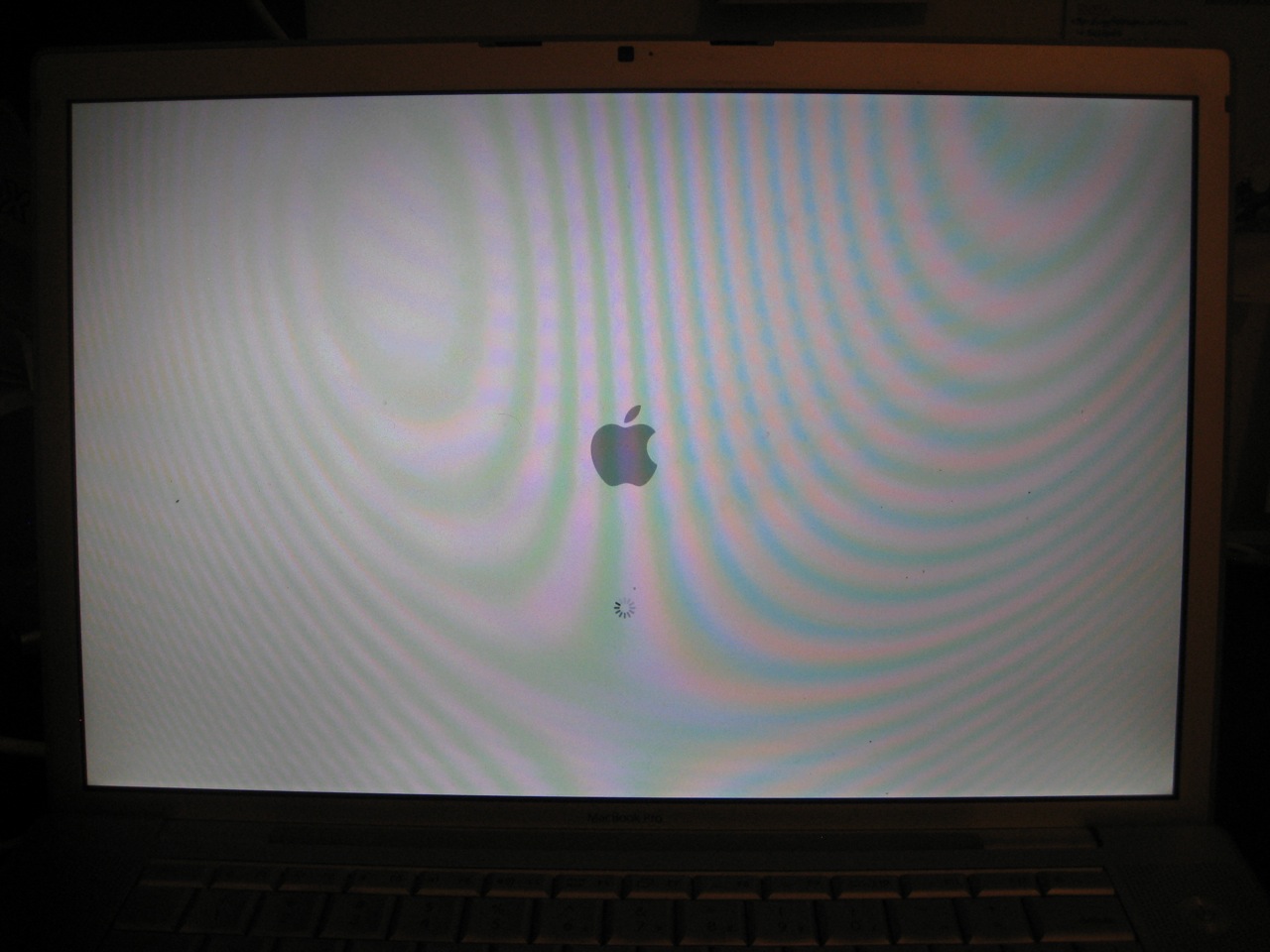 – I successfully Reflowed the graphics chip to the Logic Board
– I am writing this from my MacBook Pro 2.16 Ghz Intel Core Duo (May 2006)
– I will still get a new MacBook Pro (as I can’t be certain how long this treatment will work)

– There will be a video and photos to follow!

– My extent of Computer/Mac-savvy extends only so far as to say that I’m better than most people’s parents, but I’m not so advanced…  The Internet got me to where I am right now.

LINKS (in chronological order over the last week):

– The first result that was similar to mine…
http://blog.jtimothyking.com/2010/01/11/ever-had-a-computer-that-wanted-to-make-your-life-difficult

– What I found after seeing the above linked video…
http://geektechnique.org/projectlab/726/diy-obsolete-ibook-logic-%20board-repair

– The video I used to open up my MacBook Pro…

– The video I used to get past the Logic Board…

You can check out the video I made (on the computer in question) after fixing it up, check it:

Apparently there are no posts at the moment, check again later.